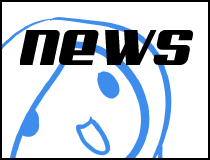 
as those two-three who read or look at my sketches and comic, i haven't updated for a while because of life, basically. yeah, lame excuse but when it's true, wat u gunna do. a bunch of new and scary stuff is happening, and it's all a bit much to handle so i've had to prioritise some things. one of those things i decided to put on the backburner is my comic'ing. i still want to do it! i just need more time to digest all the things i'm doing now and will be doing soon. depression and general anxiety slows my progress but i'm confident i'll be back on the comic treadmill at summer time, and hopefully i can do bigger projects as well. however, now my computer decided to ignore the drivers to my tablet, so it doesn't work right now, because of course. so that needs fixing :/ 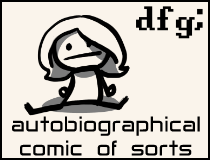 
dfg; has updated yet again! ok, it's like the second time, since starting, i made it sound like it's been going on for years.
dfg; - me on the weather 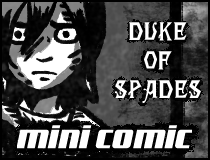 
short horror/unsettling/maybe not really mini comic i drew for halloween in 2013, based on a dream i had once. it's weird and is not very good but hey, i drew it in three days.
read Duke of Spades